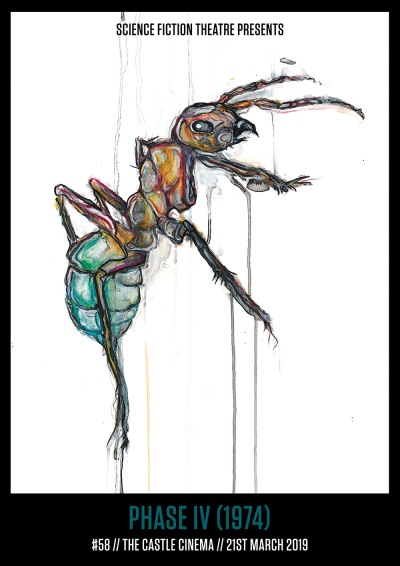 When a desert ant population teams up with others of their species to create a super colony, two scientists (Nigel Davenport and Michael Murphy) search for an explanation to the evolutionary shift that has allowed the ants to adopt a hive mind. But when a lone survivor (Lynne Frederick) takes refuge in their lab the ants begin to infiltrate, and the scientists are faced with the choice of either communicating with, or eradicating their antagonists…

“Think of it as the 2001: A Space Odyssey of treacherous ant movies.”
–Den of Geek

“A period masterpiece that is both a microcosm of contemporary progressive issues and a beautiful, intelligent science fiction film.”
–Electric Sheep Magazine

“As intelligently crafted a science fiction movie as you will ever see.”
–Reel to Real

“A creepily effective thriller, a heavy philosophical trip and even possibly a metaphorical argument in favour of Communism.”
–Birth.Movies.Death

“An unsettling, spooky film. It’s not just about a war between man and insect. Rather it depicts a war between the ideals of individuality and the community.”
–J. K. Muir

The film will be preceded by a talk from Dr Yannick Wurm, Senior Lecturer in Bioinformatics at Queen Mary University of London, who will provide an overview of the fascinatingly diverse lifestyles of ants, and how we are using modern genetic tools to understand how this diversity comes to be.