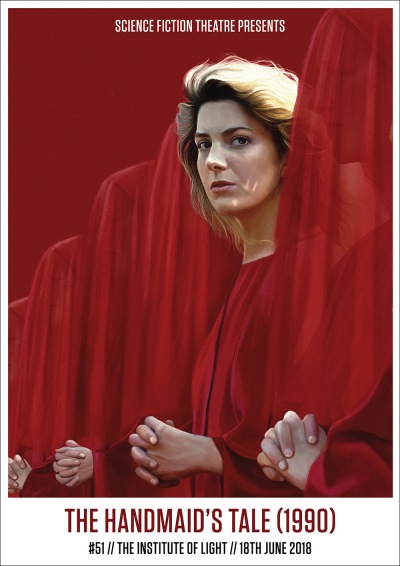 The USA has become The Republic of Gilead, a right-wing totalitarian state. Women are subjugated and powerless in society. The world is rife with disease and infection, and few women remain who can have children: those who can are taken by the government and christened ‘handmaids’. Kate (Natasha Richardson), a handmaid, is sent to the house of Fred (Robert Duvall), the Commander. There she must submit to his demands, and those of Serena Joy (Faye Dunaway), his jealous, vindictive wife. But some things cannot be controlled by The Republic – like Kate’s growing feelings for The Commander’s chauffeur Nick (Aidan Quinn). Or the secret resistance, who meet under darkness…

“As visions of a hellish, dehumanizing future go, this one could never be mistaken for a man’s.”
–New York Times

Before the film, Dr Caroline Edwards, Senior Lecturer in Modern & Contemporary Literature at Birkbeck, University of London, will consider the impact of Margaret Atwood’s 1985 novel ‘The Handmaid’s Tale’ in the context of Hulu’s TV adaptation and the Trump administration.