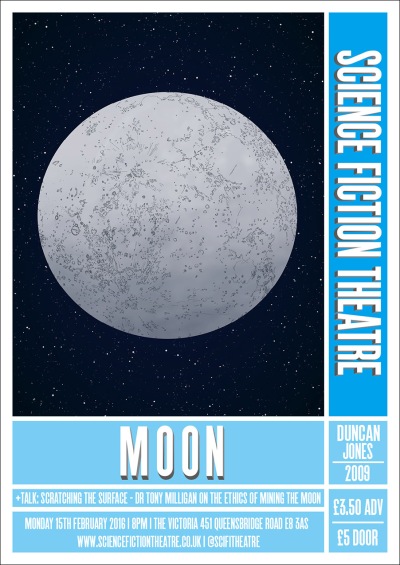 Astronaut Sam Bell (Sam Rockwell) is weeks away from completing his three-year contract with Lunar Industries, mining helium-3 from the surface of the Moon. With only computer GERTY (Kevin Spacey) for company and sporadic messages from his wife and daughter, Sam is anxious to get home to see his family. But the isolation has taken its toll, and when a hallucination results in a terrible accident on the lunar surface, Sam wakes up to find that he is no longer alone…

“Moon is an old-fashioned sci-fi movie in the best sense: far more psychological drama than space opera, dispensing with overweening CGI and loud flashy action sequences while harking back to subtler, more ideas-driven entries in the genre”
–Sight and Sound

“Duncan Jones pulls off sci-fi miracles on a $5 million shoestring. Moon is a potent provocation that relies on ideas instead of computer tricks to stir up excitement”
–Rolling Stone

The film will be preceded by a talk from Dr Tony Milligan, teaching fellow in ethics and philosophy of religion at Kings College London, who will explore the morality, ethics and justification for mining the moon.